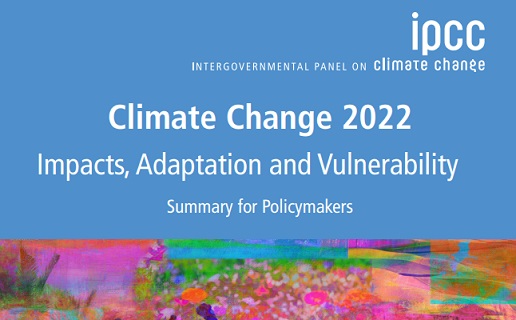 The contributions from Working Group II focused, as the report’s title suggests, on the impacts of and vulnerability to the climate crisis. However, the theme of adaptation was just as prominent. Lost is the opportunity to prevent human-induced climate change. As Inger Andersen, Executive Director of UNEP, put it, “even if we limit global warming to 1.5°C, the blows will come harder and faster.”

That said, there is still a drastic need to reduce emissions now and reach zero carbon by 2050. Every degree lowered means less damaging climate impacts. But we have now crossed the Rubicon and must acknowledge the reality and imperative of adapting to a changing world.

This call for urgency stems from the report’s finding that “the window to adapt to climate change is rapidly closing.” Not only must work on decarbonisation continue to blunt the most extreme effects of climate change and reduce the need for adaptive measures, but time is also of the essence in resourcing and equipping communities to adapt.

Petteri Taalas, Secretary General of the World Meteorological Organisation (WMO), identified 127 risks from the climate crisis, covering sectors as diverse as health, agriculture, economy, infrastructure, and ecosystems. For example, he suggested that, on a reasonable worst-case scenario, flooding for islands in the Indian and Pacific Oceans would double by 2050. One of the most effective mitigatory tactics that Taalas identified was investment in early warning systems. Yet only half of the 193 WMO members currently have the proper equipment to warn their populations of impending floods, with severe gaps in African and island nation-states.

Additionally, the Working Group II Co-chairs, Debra Roberts & Hans-Otto Pörtner, found that 3.6 billion people live in hotspots at increased vulnerability to climate change, with Indigenous communities to be harder hit than other populations. This finding is a sad irony considering the IPCC continuously acknowledges Indigenous and local knowledge systems as “a rich foundation for adaptation actions at local scale.”

The report points out further risks. For example, agricultural productive growth in Africa since 1961 has been reduced by 34% due to climate change. If global warming exceeds 2.0°C, yield crops will fall. Even a 1.7°C rise will result in lower fish harvests that could leave up to 70 million vulnerable to iron deficiencies, 188 million to vitamin A deficiencies, and 285 million for vitamin B12.

But these outcomes are by no means a fait accompli, and the report identifies means of adaptation:

In other areas too, means of adaptation have been listed, including: building seawalls and river barriers, planting trees on hillsides to stop landslides amid floods, conserving or regrowing mangrove swamps to absorb the impact of coastal storm surges, painting roofs white to reflect the sun’s heat, and ensuring buildings and built infrastructure (such as telecommunications networks, roads and railways) are more resilient to extreme weather.

These are reasonable and realistic suggestions but will rely on a certain amount of (political and financial?) stability and security to be achieved. In areas including construction, agriculture, energy, and science, investors have the chance to engage in possibly lucrative opportunities. However, there are currently very few channels for investors to seize these opportunities.

The chairs called for governments to provide clear goals and priorities that can define responsibilities for mitigating and adapting to climate change, as well as identifying how nature can reduce climate risks and improve people’s lives and livelihoods. The report provides “a serious reality check,” but a sense that “we can be agents for change.”

It is therefore incumbent on governments to ensure that investors can contribute. That will involve simplifying and opening markets, subsidies, and governance reforms. The alternative will see hundreds of millions suffering as a result of climate change that could have been mitigated and to which people could have adapted better.

You can find the report here, and watch the press conference here.

LAPFF responds to UK Endorsement Board on IFRS 17 – Insurance accounting